It is 1961. California. A salesman has his motorized roller skates refuelled at a gas station.

In a sense he has his potential to drive sales augmented – he will be moving faster, transmitting the “marketing message” to more people, with higher efficacy.

And just as he gains speed to reach yet another door… an intergalactic glitch throws him in 2020.

An explosion. Of messages and media. And exploded dialogue.1 The twentieth century is full of discourse produced in what Paul Ricouer would call situations of exploded dialogue.Speaking into the Air: A History of the Idea of Communication

Unaware of the dramatic change in the context of the person behind the door and still under the spell of transaction marketing though, our salesman knocks ready to enter a mass self-communication mode.

And, not surprisingly, he meets “The Man in the Chair”!

We are all The Man in the Chair now, aren’t we. Empowered prosumers (yes, Toffler, and yes, it’s been around 40 years since the term was coined) straddling fragmented digital spaces, foraging for information.

But we are also the people on the other side of content that speaks to no one. As very adeptly depicted in this cartoon of a not uncommon for today’s ways of broadcasting enterprise messages on the Web:

But Weren’t Networked Markets Supposed To Be Dialogues, Not a Runaway From Pushy Messages?

They were. As the Cluetrain Manifesto had it decades ago:

A powerful global conversation has begun. Through the Internet, people are discovering and inventing new ways to share relevant knowledge with blinding speed. As a direct result, markets are getting smarter, …and getting smarter faster than most companies.

Yet something is still going wrong with lots of the web content. Sometimes it feels like enterprise communication specialists have slipped into 2020 without noticing the phenomenal tectonic change the Web brought?

Web imperfect marketing communications when it comes to the so called user-generated content (the one produced by us, the users on the Web and the one very well described by Kaplan in Users of the World, Unite! The Challenges and Opportunities of Social Media:

Just like Jeremy Keith thinks that we participated in a collective hallucination when we decided that the Web or a website will be viewed on a certain device of a certain size, on a certain kind of network, I think, there is still a shared hallucination about the Web being a marketing medium, a tool for broadcasting and selling, or worse, for corporate monologue.

But could it be that all is not about sleek content and shiny websites and harnessing, analysing and taming new marketing channels?

Could it be that content on the Web is about a new mindset.

It could be and it is. “Marketing” content is gradually switching to Web mode. To a state where conversations are being catalyzed and authentic connections are being advanced. We are starting to see the Web as a giant repository of shared (linked!) knowledge. As an information highway with public spheres forming around and beyond it. As a public battleground.

And as we move from selling on the Web to telling on the Web, we do not need yet another digital tool. We need a different way of perceiving connected cyber spaces and enacting content.

We need dialogue. Not only the interpersonal one but also the one within groups and communities. Scholar Magda Pieczka defines these, following Linder’s two classical models of dialogue: the Socratic and the Athenian. “While the first one is defined as Socratic interrogations in pursuit of self-knowledge and virtue‘, the latter refers to Athenian deliberations for collective governance‘ In short, they represent two directions present in the western conception of dialogue: inquiry and will formation” (see: Public Relations as Dialogic Expertise?)

Welcome to the universe of endless dialogue

If I were to help the salesman (remember the one with the roller skates under the spell of transactional marketing) understand where the intergalactic glitch took him, I would tell him about the Web but reword the title of the browser window to the Web in the 1990s, reading “Welcome to the Universe of Hypertext”, saying: “Welcome to the universe of endless dialogue”.

And then I will explain about the dialogue in the sense of a tool for thinking and sense-making. I will also talk about dialogue as a process on the Web which is now bringing us closer to collective intelligence and building a more and more coherent society (the idea of coherence and dialogue I got from Bohm’s on Dialogue).

But most importantly I will tell the salesperson: A content (marketing) tool dialogue is not. It is the content.

Me, squeezed in a paragraph

I am a philologist fascinated by the metamorphoses of text on the Web, curious about the ways the Semantic Web unfolds. Currently I am a PhD student at the Sofia University, exploring how content writing is changing, changing us and the way we think, write and live. Read more about me

The Brave New Text  is a book about web writing and how it transforms the way we communicate, exchange, experience and explore thoughts, ideas, goods. It is a kaleidoscope of perspectives through which you will see texts on the web, as new forms of textuality, as webs themselves, as processes that change us, word by word, link by link.

My Tiny Companion to Weaving Texts on the Web

This is a Web Writing guide to help you pave your own road to approaching web writing and making the best of it as a tool for growth, connections and more business. 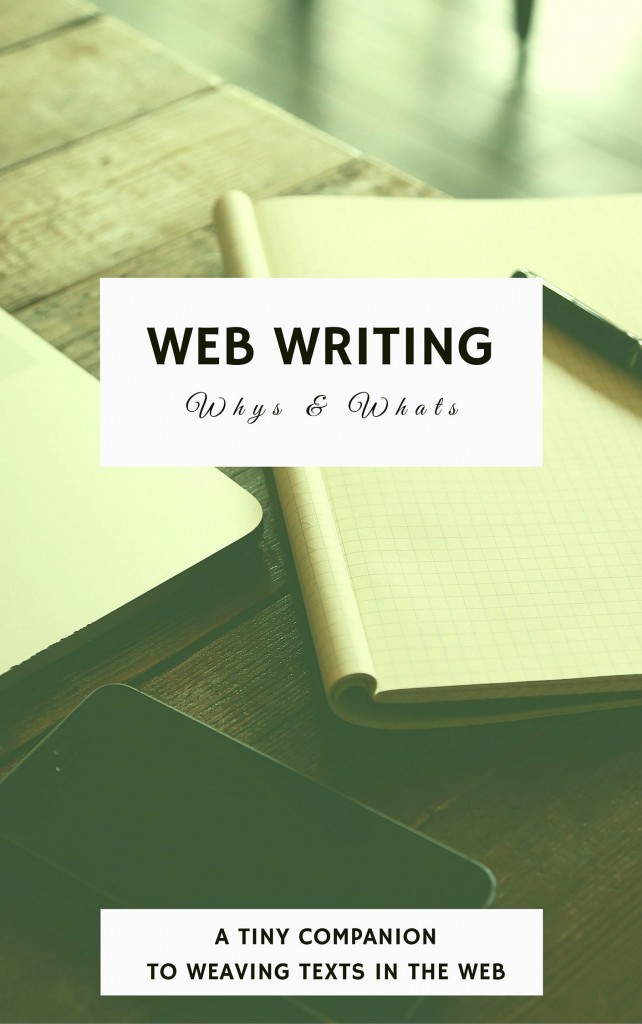 I am currently reading:

I also try to have a newsletter :)

P.s. Trying to "own my data" I first publish the newsletters here

My series of talks: The Intertextual Animal

Web Scriptorium: Let’s talk about text on the Web

Web Scriptorium (a corporate web writing training) is live: https://t.co/bzVLSmHkQW. Join me, @DavidAmerland, @mrcruce and @cyberandy (or the “switching-codes collective” as I like to call us :) for a journey across the lands of text, data and meaningful communication on the Web. pic.twitter.com/7WvX9xxnHM

The Poiesis of Relationships

Intertextuality Digital Text as a Phenomenon of Culture
0