Does writing in cyberspace have a muse, and if yes, what does it look like?

What is it that inspires web writing and how is a web text different from other forms of creative expression? And what if there was a bridge connecting the understanding of the Web as a giant repository of our collective memory, to another means of transferring knowledge, that is to the Homeric epic?

With these questions in mind, I set off to imagine the muse of web writing. 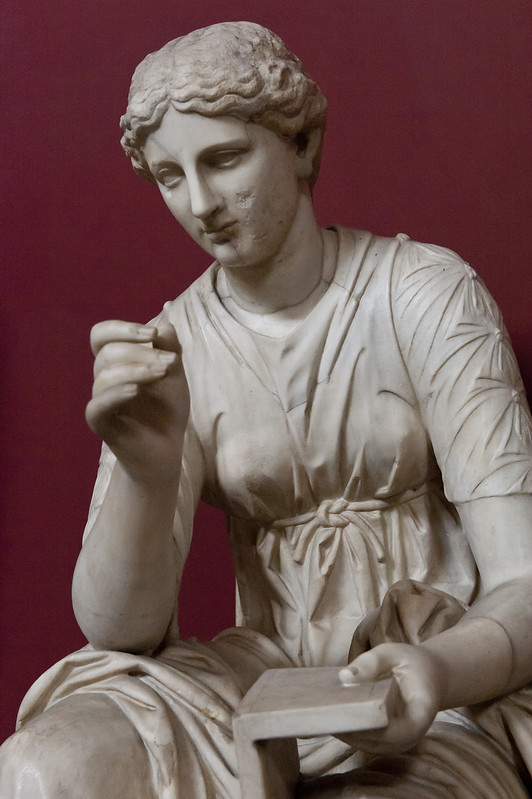 “[…] the intention of the Homeric epic were bifocal.  On the one hand they were recreational: the poetry was product of an art designed to entertain, this being the preferred criterion by which modernity has judged them, usually adding the qualification that the entertainment is somehow mysteriously elevated. On the other, the poetry must also be seen as functional, a method of preserving and “encyclopedia” of social habit and custom-law and convention which constituted  the Greek cultural tradition of the time when the poems were composed.”cit. The Muse learns to Write, Eric A. Havelock, p. 58, Speech Put in Storage
~
“It is, of course, true that in primary orality, functional content is cast in verbal forms designed to assist the memory by conferring pleasure: social and aesthetic purposes form a partnership.”

What gave me courage to explore the idea of web writing having a Muse was a reminder I found in  Havelock’s The Muse Learns to Write. The reminder was the etymology of mnemosyne:

Greek mnemosyne, literally “memory, remembrance,” from mneme “memory, a remembrance, record, an epitaph; memory as a mental faculty,” from base of mnasthai “remember,” from PIE root *men- (1) “to think.”

The Muse I Found:  a Liminal Creature between Hyperland’s Tom and Homer’s Automata

If web writing had a muse, I thought, it would be Him – Tom, the software agent Douglas Adams envisioned in the movie Hyperland.

Hyperland is a one-hour documentary produced by the BBC in 1990. In the movie, Douglas Adams falls asleep in front of a television and dreams about future time when he may be allowed to play a more active role in the information he chooses to digest. A software agent, Tom, guides the author around a multimedia information landscape, examining the notion of hypertext, for his “interactive pleasure”, as Tom puts it.

On a more poetic and less cyberpunk note, the Muse would be very much like Homer’s Automata. But instead of helping Hephaestus, it would be helping us, web writers and us readers, fetching documents, papers, books and all kinds of information and thoughts to and fro, leaving trails of shared knowledge and experience across cyberspace.

[Hephaistos (Hephaestus) left his bellows] took up a heavy stick in his hand, and went to the doorway limping. And in support of their master moved his attendants. These are golden, and in appearance like living young women. There is intelligence in their hearts, and there is speech in them and strength, and from the immortal gods they have learned how to do things. These stirred nimbly in support of their master

Read more about Automata at: THE AUTOMATONS

This muse of web writing, I saw, will ride a hybrid chariot built of algorithms and perspectives, of machine-readable signs and human-enacted visions.

The Muse’s chariot will be built of electronic signals, connected to every word across the Web. It will be have different forms, being an electronic field of whirling currents of informational fields, drawing words, meanings and concepts from seemingly distant areas of knowledge.

This algorithmic chariot, the Muse will use to carry web texts across a space where data flows freely and seamlessly (read across the Semantic Web). Travelling and visiting the different information architectures we build on the Web, the Muse will nurture and be nurtured by the interplay of perspectives happening in this shared cyberspace. The Muse will give us wings and support us in knowing that daring to write on the Web is caring to communicate and build shared understandings across words, thoughts and protocols.

With such a  Muse nearby, we will be more freely and joyfully writing not only poetry and prose on the Web, but also product pages and FAQs, knowing that they all will add to the enormous knowledge container we are filling every time we publish on the Web.

Inspiring us to create engaging, resonating and beautiful content for the Web we want, the Muse of web writing will always be around, humming its wisdom about the text on the wings of smart technologies. And the next time we are assigned with writing content for a hologram, we will not focus  on, or be intimidated by, the technology of the medium, but rather will be excited about yet another means of connecting:  words, people and data. For the Muse of web writing will be constantly reminding us about an understanding that connects texts on the web with the act of creating poetical (in the very broad sense of the word) forms that “assist the memory (and the Web as our collective memory) by conferring pleasure”. The pleasure of hypertext included.

I am currently reading:

My Tiny Companion to Weaving Texts on the Web

This is a Web Writing guide to help you pave your own road to approaching web writing and making the best of it as a tool for growth, connections and more business.

I also try to have a newsletter :)

P.s. Trying to "own my data" I first publish the newsletters here

My series of talks: The Intertextual Animal

Web Scriptorium: Let’s talk about text on the Web

Web Scriptorium (a corporate web writing training) is live: https://t.co/bzVLSmHkQW. Join me, @DavidAmerland, @mrcruce and @cyberandy (or the “switching-codes collective” as I like to call us :) for a journey across the lands of text, data and meaningful communication on the Web. pic.twitter.com/7WvX9xxnHM

If Web Writing Had a Muse …

The Poiesis of Relationships We, Linked Data

Intertextuality Knowledge Soup for the Soul
0